Here is a little trivia to impress your friends around the water cooler.  The Larkin building utilized many technologically forward thinking systems.  The wall hung toilets and the heating and ventilation system usually tops the list, but rarely do you hear the mention of the lighting.  While its well known that the design boasted natural light throughout the building via light wells and skylights, few people know of the electrical system, and even less understand how that system worked. While the natural lighting in the building preformed well, you have to take into account that the Buffalo winter daylight was short.  Because of this, Wright had to incorporate artificial lighting into the building.  I know what you are thinking…Edisons lightbulb was the hot new rage in 1905!

There was actually a better, brighter, longer lasting light, that was a “new technology” known as the Nernst Glower or Nernst Lamp.  More importantly, it gave off a bright color spectrum matching daylight.

“The Nernst Lamp was invented by Walther Nernst (a physicist) in Göttingen, Germany in 1897. This lamp emits a natural light, close to the daylight spectrum, unlike incandescent bulbs.”[i]

The Nernst Lamp used a ceramic rod that glowed. Unlike Edisons bamboo and cellulose filament, the ceramic would not oxidize, so it did not need to be enclosed in a vacuum bulb.  They were also easily interchangeable, unlike Edison bulbs which did not yet take advantage of a screw base.  These lights, while strange to us now, were a serious competitor for Edison in 1905. 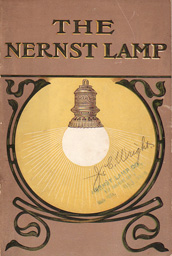 Nernst Lamps were a popular addition to the Paris Exposition in 1900 and “By 1904 a total of over 130,000 Nernst glowers had been placed in service throughout the country.” [ii]   The lamps had continued use until 1913, when finally they lost the competition to General Electrics more convenient bulb. Bonus trivia-this was after Irving Langmuir (a PhD student of Nernst) became employed at GE.

Since this forced the glowlights to become obsolete, it would explain why all the Larkin light fixtures in photos from later years have been replaced or removed.

So now you know… More Bonus Trivia:
The “Nernst Glower” was important for use in the medical field in infrared spectroscopy until the1980s.[i]